March 30, 2022 – By comparing the shares by state from January-March 2020 to January-March 2022, there was a shift in the mix of where aspiring franchisees were expecting to locate franchises – from north to south, and east to west, according to new data from FranchiseInsights.com. Increasing state share in that period is in green, and decreasing share is in red in the map above.

Note that the state locations shown are where the prospect was searching to buy franchises, which in most cases is the prospect’s current state of residency.

California and New York had the largest absolute changes in percentage share of franchise prospects during the pandemic among all 50 states. Among the states with the largest increase in share, southern border states (minus Florida) were the largest gainers, along with  Missouri, Oklahoma and Tennessee. 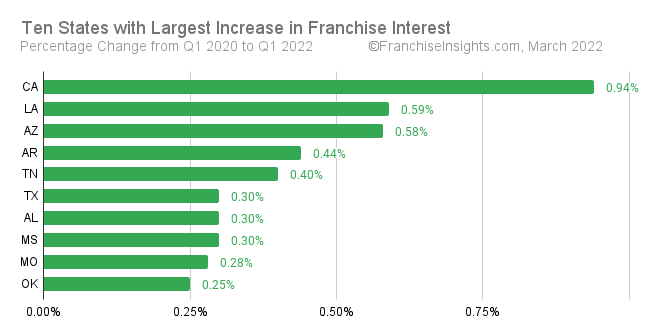 The chart below shows the percentage change for the top states with the largest 2022 franchise interest, where only California and Texas had increases. 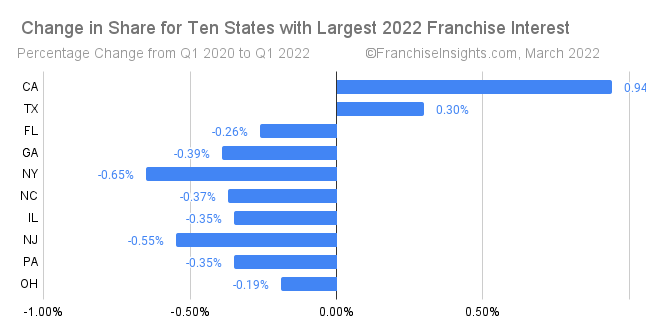 The overall trends in location of interest support the theory that having experienced remote work and more flexible working conditions brought about by the pandemic, workers have sought to move to warmer and less-populous states. In this analysis we did not look at in-state migration – from larger to smaller cities with more affordable homes and less traffic, for example – which may explain the increase in California share, rather than net migration into the state.

This proprietary data is drawn from the FranchiseVentures platform of franchise-investment inquiries in the United States.

By Geography
Connect with us onLinkedInSubscribeto Franchise Insights