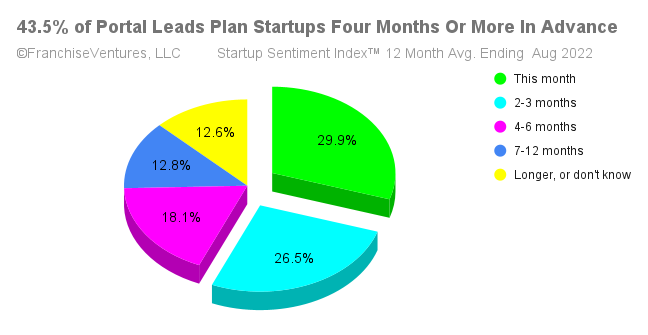 NORFOLK, VIRGINIA — September 21, 2022 — In comparing lead sources, “price”, and even the holy grail – “cost per sale” – are incomplete, if not misleading. There are two other critical variables in assessing return on your investment in franchise portals or other third party lead suppliers. In a prior article, we quantified the referral or pass-along value of franchise portal leads. But an even greater value exists over the lifetime of a lead or prospect who has given consent for you to contact them.

Given the level of time and investment required to launch most franchises, a large percentage of prospects will begin their research long before they are ready to launch,  as evidenced by the data above. To calculate the true return from a lead and its source, you have to look at actions taken over a relevant period of time, and in the case of a major considered purchase (like buying a business), that time frame is at least a year or two.

What are the key components of Lifetime Value?

In the case of franchise leads, a simple way to approach calculation of lifetime value is to think about the sum of three buckets.

1. Immediate conversion value in the first week to a few months (56.5% of prospects, from the chart above)

Example: Using a hypothetical lead conversion rate of 1% and the median franchise fee of $55,000 the immediate conversion value would be $310.75 per lead.

Example: Several months or a year later, a lead responds to drip marketing, re-engages, and converts. With a conversion rate of 1%, the median franchise fee of $55,000, and the remaining 43.5% of leads (sum of percentages for four to more than twelve months in the chart), the longer term expected value of a lead would be  $239.53.

3. Long term value of a prospect who buys a franchise:

The sum of future years cash flows from the franchisee, discounted back to now at an appropriate rate. While the determinants of this value are very franchise-specific, this is the most significant component of lifetime value, and is the heart of the franchise development model.

Note that to calculate “return on investment,” one needs to subtract the variable costs –cost of the lead, and the cost of labor to work the lead. Since all leads would have similar costs like commissions, cost of discovery days, etc. they are useful for calculating ROI, but not for comparing lead sources.

While much of the discussion about franchise leads centers around cost per lead, cost per sale, and conversion rate, tapping into lifetime value is the goal of every growing franchise.

Lifetime value is the cumulative return over the useful life of a lead. While the above examples are hypothetical, clearly much of the value occurs after initial engagement with the prospect. In many cases, the prospect is researching and considering franchise ownership, but planning to move forward in the months or years ahead. Don’t neglect this extremely valuable cohort of future franchisees.

Coming articles will focus on best practices to capture this value.

The Small Business Startup Sentiment Index™ survey is conducted monthly by FranchiseInsights.com from a sample of franchise inquirers across the FranchiseVentures lead generation platform. The data presented here is for the twelve months ending August 2022.