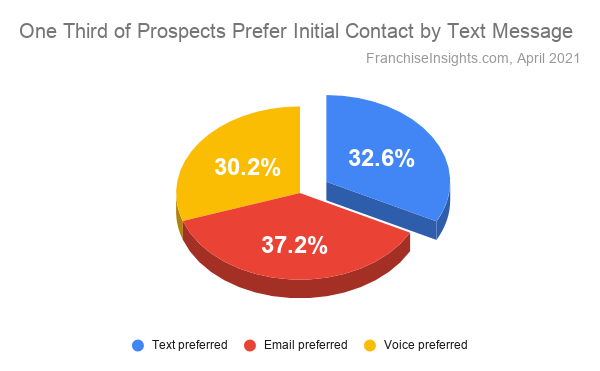 April 21, 2021 –The highest percentage ever of aspiring owners seeing information about franchises cited text messaging as their preferred channel for initial contact in an April survey by FranchiseInsights.com. Almost a third chose follow-up by text (32.6%), edging out “voice” at 30.2% of respondents asked to rank voice, email and text.

Likely contributing to this preference is the ubiquity of mobile phones among business buyers. Analysis of 2020 data by FranchiseInsights.com showed that of contact numbers submitted by prospects in 2020, 75.1% were mobile phones, 22.9% were landlines, and the remainder (2%) were not identifiable.

In the same survey, 53.2% said they were “unlikely very unlikely to accept a phone call from a franchise” if they had “not previously received a text message or email from that company with more information.” Email remains the most preferred channel for initial contact, at 37.2% of respondents. Of course, the asynchronous nature of email makes it the most effective channel outside of business hours, and on weekends and holidays. It is also a more rich medium for telling a story or conveying information such as video, links or a pdf brochure.

The percentage of prospects preferring text as the first channel averaged 21% in the twelve months ending January, 2021, and have exceeded that average since November 2020 consistently. 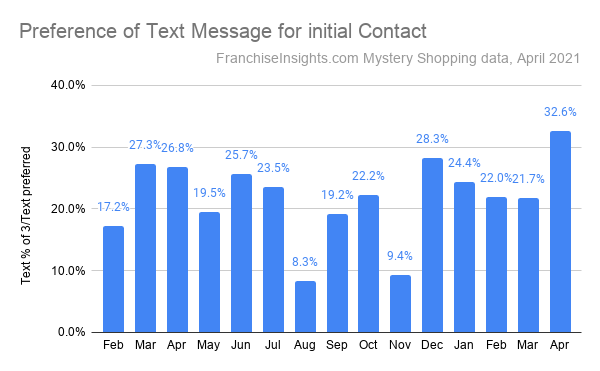