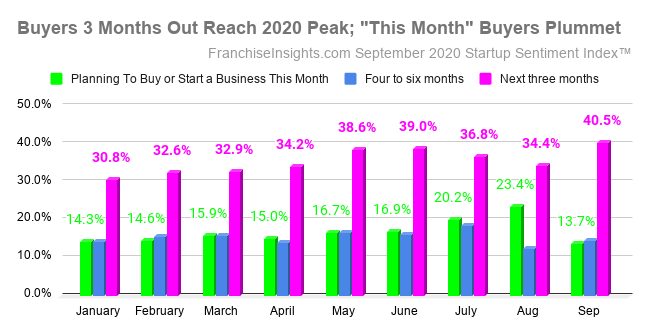 In a remarkable turnabout, future business owners planning to start “this month” plummeted, while startups planned “3 months out” reached the highest ever recorded in responses collected September 23-30 2020, for the FranchiseInsights.com Small Business Startup Sentiment Index™.

In August we reported the encouraging development that over 36% of August respondents indicated they are  “more likely to start a business now than three months ago,” and the percentage of respondents that were “less or much less likely to start a business than three months ago” decreased to 8%, the lowest reading in 2020. These notable improvements in buyer optimism might suggest that concerns about the pandemic have been recently overshadowed by concerns about the near-term economy and the upcoming election. 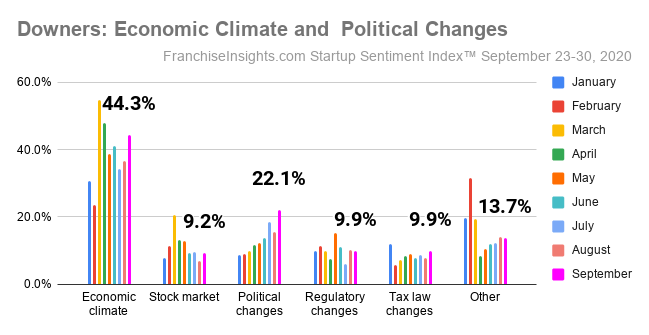 Concerns Among Entrepreneurs about the Upcoming Election Soar

While concerns over the “economic climate” at 44.3% of respondents overshadows most other factors cited in September, 22.1% of prospective business buyers cited “political changes” as a key factor, increasing from 8.8% of respondents in January to 22.1% in September, a 251% increase in eight months, in perhaps the most extraordinary and contentious election in our lifetimes.

The Small Business Startup Sentiment Index™ is based on a monthly survey of individuals who have recently inquired about businesses or franchises for sale on the digital assets of FranchiseVentures.