Mid-sized metropolitan areas under 1 million population showed some of the strongest year-over-year growth in franchise-buying interest, claiming 7 of the top 10 spots in latest business data from Franchise Insights. The rest of the top 10 were large metros with 1-5 million population, and only two major metros over 5 million ranked in the Top 20. 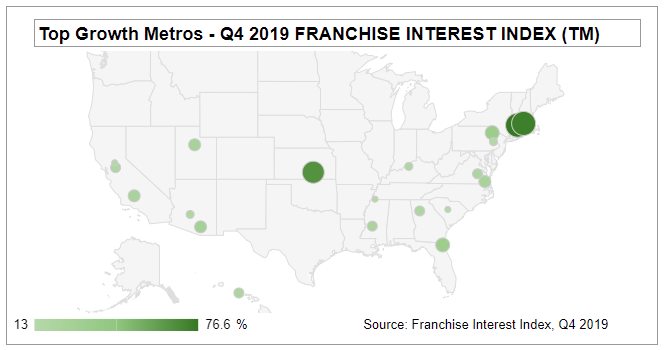 The Franchise Interest Index™ reveals the relative interest of entrepreneurs making an investment inquiry by indexing proprietary data against a region’s adult population on a per capita basis. This analysis compared Q4 2019 investment inquiries to the year-earlier period for 106 MSAs (metropolitan statistical areas) with more than 500,000 in total population.

Franchise Ventures is the largest demand generation platform serving  thousands of growing franchise systems in the United States and Canada. Its franchise lead-generation businesses include Franchise.com, Franchise Solutions, Franchise Gator, Franchise Opportunities, Franchise For Sale, BusinessBroker.net, and SmallBusinessStartup.com and together they provide the largest collection of prospective franchise inquiries in the U.S.