What is the Best Age To Start a Business? 40s and 50s Are Golden Years for Future Franchise Owners 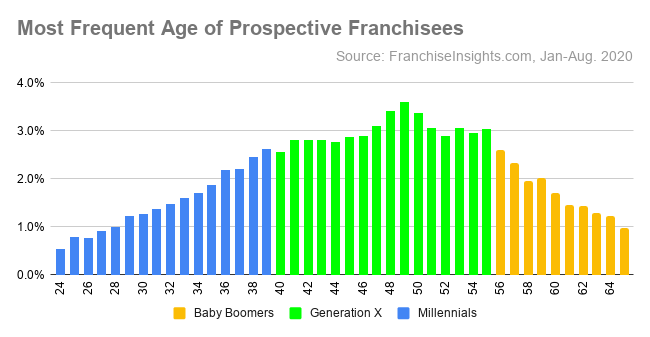 Step Aside Millennials: Most Common Age for Franchise Prospects May Be Older Than You Think – Success Can Come at Any Age

September 17, 2020 – While successful entrepreneurs start businesses at any age, the most common age may be older than you think. A current analysis of prospective franchise owners shows the most popular ages for exploring business ownership range from the mid-30s to mid-50s, peaking at age 49 in 2020.

Generation X is far and away the largest group of franchise prospects, with the 39- to 54-year-olds comprising 47.5% of prospects in 2020 year-to-date, drawn from the FranchiseVentures network of franchise directories, which provides the largest flow of franchise-investment inquiries from potential franchise buyers in the United States.

There are certainly prominent examples of founders who started some of today’s largest businesses while in their 20s – Bill Gates of Microsoft, Mark Zuckerberg of Facebook, or the founders of Google. But one the most popular forms of small business ownership – franchising – has particular appeal for entrepreneurs in their prime working years. One reason is that they’ve developed both business experience and confidence to run their own business. Another is that they have had time to build enough financial assets to invest in a successful startup.

Conversely, the success of middle-aged startups may be related to the relative disadvantages of younger entrepreneurs, despite the many famous exceptions – Gates, Zuckerberg, among others.

A 2018 study published in the Harvard Business Review found that  entrepreneurs over 40  were more likely to succeed, and that the average age of a successful founder was 45. Further, the 2019 academic report on that research of 2.7 million entrepreneurs shows a similar distribution by age as the chart above from 2020, and a clear shift to greater startup success after age 40. 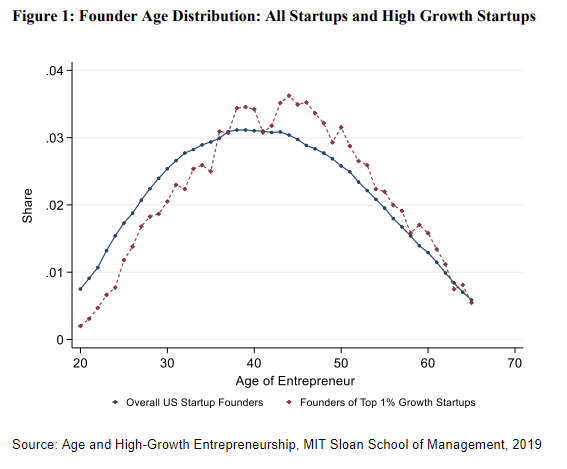