Franchise Development Contact Attempt Rates Are the Highest Since October 2020 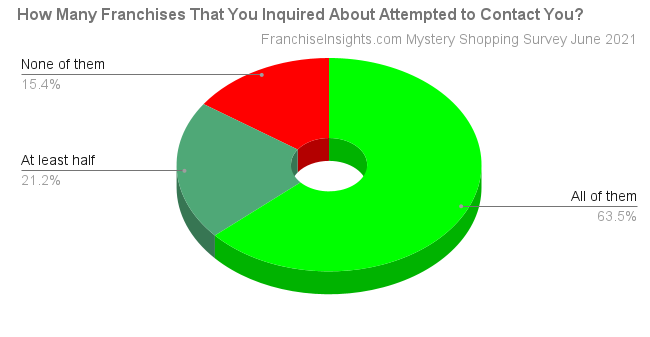 June 23, 2021 – In June, franchise sales teams performed at the highest levels in over eight months according to results from the FranchiseInsights.com Mystery Shopping survey. Respondents reporting that they were contacted by “all of the franchises they inquired to” reached 63.5%.  Further, those who reported being contacted by “none of them” dropped to a recent low of 15.4%.

During the turbulent pandemic summer of 2020, contact attempt rates dropped as low as 45.5% in June, with 27.3% of those surveyed reporting that none of the concepts that they requested information from followed up at all. That downtrend reversed as fall 2020 approached, and contact attempt rates peaked at 65.6% in October. 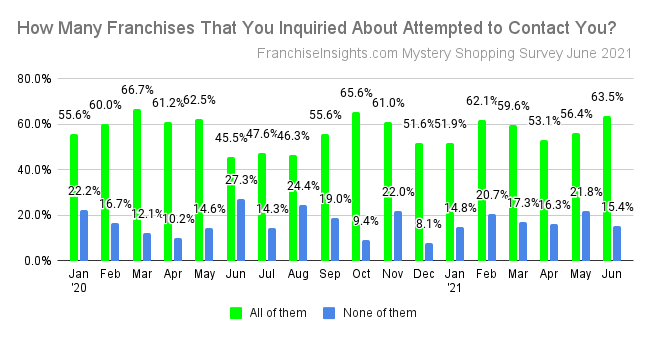 Underscoring the importance of this uptick in contact rates is the data that 45.8% of prospective buyers submitted an inquiry to only a single business concept and 62.6% made inquiries to only one or two concepts as we recently reported . So franchise sales teams with prompt follow up can increase their chances of exclusive contact.

The survey is conducted seven days after franchise inquiries are made, so slow response is part of the problem. But the number of prospective franchisees never contacted by any of the franchises that requested information is puzzling, given the lost opportunity. Inquiries received outside normal business hours are another likely contributing factor. Sending prompt or automated email and/or text follow up as a precursor to a voice call is always a best practice, based on respondent feedback.

In an effort to help improve contact rates, the Franchise Insights mobile app was launched in early 2020 to enable franchise development professionals to increase early engagement with prospective buyers. The app is offered free of charge to FranchiseVentures clients.

The “Mystery Shop” survey is conducted monthly by FranchiseInsights.com from a sample of franchise prospects that have submitted inquiries on the FranchiseVentures lead generation platform. The latest data is from June 10-14, 2021.