Franchise Inquiries Rise in Most Categories as States Reopen 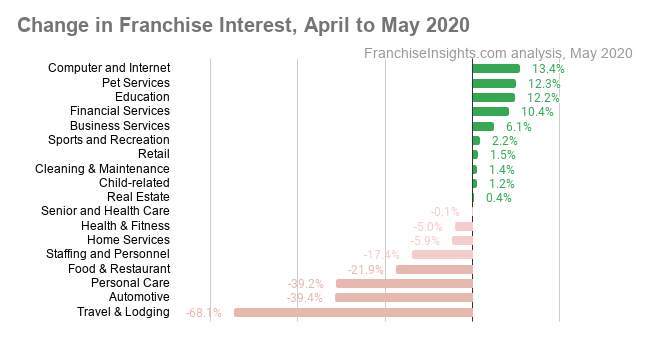 After months of economic uncertainty driven by the coronavirus, investment interest rose in May in most franchise categories in the United States.

While the most growth occurred in categories that are less affected by mandated closures and social distancing, even some categories more directly affected by the pandemic saw positive signs as the average number of inquiries per franchise grew from April to May 2020.

Franchise Categories Showing the Most Growth

The largest declines came in categories sensitive to social distancing, and in some cases this simply reflects franchises that have reduced recruitment efforts during the worst of the pandemic. Fewer choices in a category actually increased lead flow to the active franchise choices. 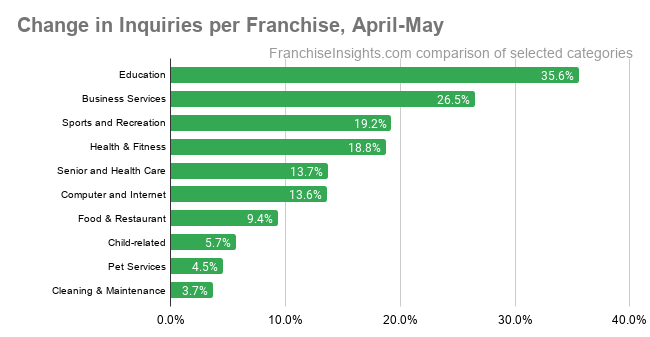 Automotive and Staffing show Counter-Trend Decreases in May

Some of the monthly changes depart from more significant multi-month trends. 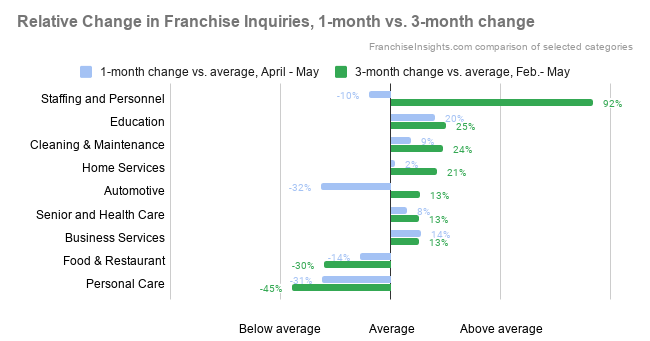 While many franchises expect growth to resume as cities and states reopen their economies, the timeline is less certain for some travel segments, like vacation and cruise planning. So it is no surprise that Travel-related franchises saw the greatest drop in inquiries in May, as only a handful of franchises were actively recruiting.

The Franchise Insights analysis is drawn from FranchiseVentures, the leading demand generation platform for potential franchisees to thousands of growing franchise systems in the United States and Canada. Its franchise lead-generation brands include Franchise.com, Franchise Solutions, Franchise Gator, Franchise Opportunities, Franchise For Sale, and BusinessBroker.net, and together they provide the largest aggregation of prospective franchise buyers in the U.S.