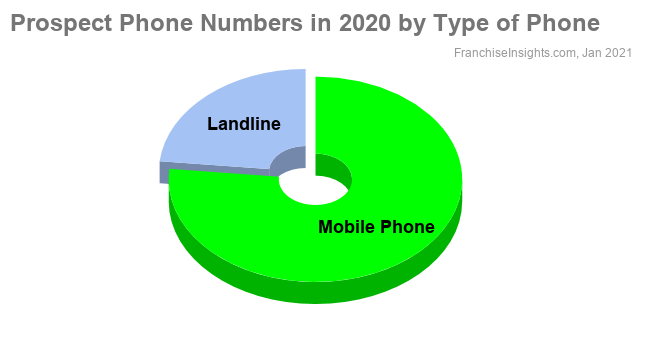 Jan. 13, 2021 – Potential business buyers who contact franchises to explore ownership are three times more likely to leave a mobile for contact than a traditional landline number.

That’s a good thing for franchise development teams – it opens up new communication channels with texting as well as voice calls, and numerous industry reports indicate higher response rates with texting. But it also requires consideration of business etiquette standards and attention to compliance with regulations for mobile phone contact.

With mobile phones being so prevalent, franchisesales teams may choose to contact prospects via phone, email or text message, or a combination of all three methods. . In fact, sending an email or text to make initial contact is a recommended best practice, since a majority of franchise inquiries are made outside of business hours, and more than 40% of prospects surveyed said they “unlikely or very unlikely” to accept a phone call from a franchise that had not first sent an email or text introduction.

And since many prospects are “live” with a mobile phone in their hands, the importance of a quick response during the acceptable call hours is clear.

Even more important is understanding and complying with federal regulations for marketing phone calls and text messages. A recent FranchiseVentures webinar highlighted the risks of not complying with TCPA and Do Not Call regulations, and offered basic advice to franchisors who want to verify compliance on their own websites and marketing partners.

The Franchise Insights desktop and mobile apps are designed specifically to make it easier to converse with prospects across multiple channels in a timely manner, and access to the apps is available for free to clients of the FranchiseVentures lead-generation portals.

[If you are a current client, and don’t have access, you can request it here.