The Continuing Saga of Franchise Leads from Meta, One Year After the Apple Tracking Changes 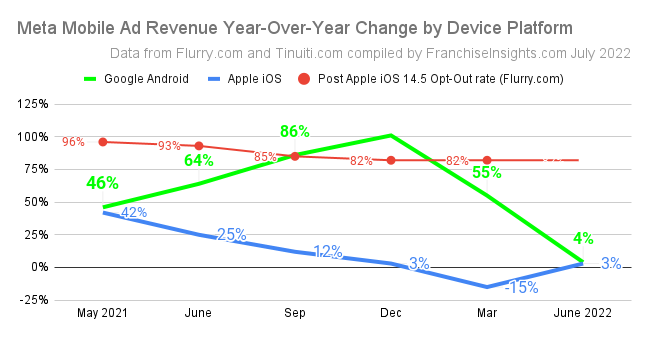 July 20, 2022 — Since we last wrote about the decline in Facebook (Meta) Lead Generation, three more months of data show that the situation may have stabilized for franchise lead generation advertisers now one year after Apple’s iOS 14.5 release, though at substantially higher costs and lower lead volumes. If you have found your Facebook and Instagram lead generation results challenging over the last two years, you are not alone. Here’s why.

The introduction of Apple’s iOS 14.5 “App Tracking Transparency” initiative to limit tracking across apps  in April 2021 led to a steady downtrend in ad impressions across Meta’s platform, declining 27% in the quarter ending June (after 15% down in Q4 2021, down another 17% in Q1 2022)  across the large advertising customer base of performance marketing company Tinuiti1.

While the “opt-out rate” (one minus the op-in rate) reported by app measurement company Flurry2 seems to have reached a plateau as of April 2022, one year after the Apple changes, it continues to show that 82% of Apple iOS US users were opting to deny tracking across all apps – ONLY 18% of users are “opting in” to being tracked.

As a result, overall ad impressions declined substantially during the past year, and declined another 7% April-June 2022 according to Tinuniti1, though a 4% increase in Facebook impressions offset a stunning 27% decrease in Instagram impressions.

But unlike recent quarters where revenue continued to grow, overall Meta advertising revenue declined 1% in Q2 2022 year-over-year for the first time ever, according to Tinuiti’s estimates, versus 10% ad revenue growth as recently as Q1. Meta’s own CFO estimates that consumers opting out of tracking will cost the company $10 billion in advertising in 2022. We may gain more insights from Meta’s quarterly earnings release on July 27.

As the chart shows, Meta mobile ad revenues from users on the Android platform continued to grow in June 2022, at 4%, though substantially slower than the more-than-doubling in December 2021. Google’s relative share growth is due to the fact that they are not currently offering users the option to block tracking, though they announced that they will begin blocking advertiser access to data across apps in late 2023, this in addition to their previously announced plan to eliminate 3rd party cookies from their Chrome browser beginning mid-2023.

Comparing Q2 2022 to the same quarter in 2020, a year before Apple’s changes, Tinuiti reports that average CPMs experienced by their very large customer base were 44% higher for Facebook, and a whopping 68% higher for Instagram. If you’ve seen your Meta lead generation costs rise significantly, that’s why.

Without a doubt, franchise leads generated from Meta face slower growth as 82% of users block tracking across mobile apps, which results in decreased targeting and tracking for Meta Platforms. This will be exacerbated in 2023 with Google’s announced privacy changes to its Android app store.. But both companies claim to be working on their own solutions to meet both the needs for consumer privacy and advertiser effectiveness, and Google is moving very slowly. Of course Google owns its own app store, unlike Meta which relies on Apple and Google for distribution of its mobile apps.

The robust conclusion is that franchise development teams should cherish and nurture the sources that are capable of reliably providing leads today, and continue to look for new sources, as dependence on any single source is risky.

1Tuniti is a performance marketing company which also provides data “based on anonymized [client] performance data from Facebook programs…with annual digital ad spend under management totaling over $3 billion.” Their complete and detailed report is available here.