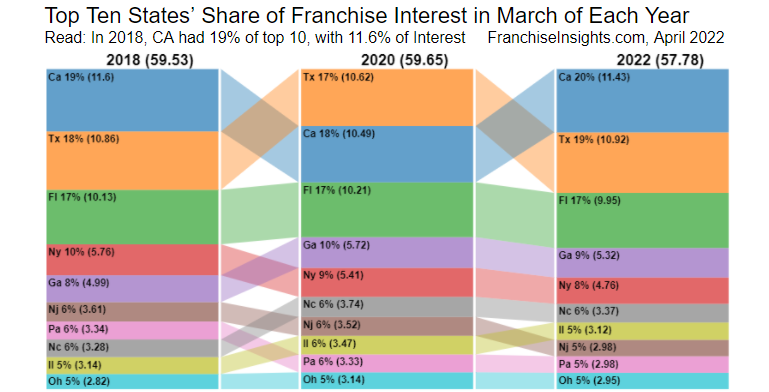 April 13, 2022 – The southward and westward migration of franchise interest during the pandemic noted in a recent article begs the question – how does that fit into the longer-term trend?

The top ten states by share of franchise prospects grew slightly as a percent of all states from 2018 (59.53%) to 2020 (59.65%) , but declined by 2022 to 57.78%. By looking at March franchise lead flow data from 2018, 2020 and 2022, as seen in the chart above, California and Texas alternately took the lead in highest percentage of total prospects in the years shown. Texas grew to first place in share (at 17% of the total share of top ten states) as the first shock of the pandemic suppressed prospect interest in March 2020, even though its share of total prospects dipped to 10.62%. In 2022, Texas fell second to California’s share, even though Texas’ share was higher than in 2018.

The longer term trend shows that the dip in share for New York, New Jersey and Pennsylvania seen across the pandemic was underway at least starting in 2018. Further, the states growing the most among the top ten – North Carolina and Georgia – began growing in share before the pandemic began. And Illinois grew across the period, even though its share of total prospects in 2022 (3.12%) was lower than 2018 (3.14%).

Note that the state locations shown are where the prospect was searching to buy franchises, which in most cases is the prospect’s current state of residency. The data do not measure movement among states, though that is certainly a factor.

The chart below shows net changes in share across the four-year period for the ten states with the largest increase in share. Here you can see the trend towards growth in southern and southwestern states that continued during the pandemic. 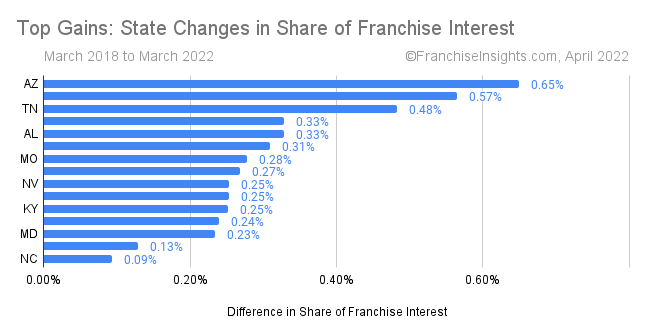 On the other hand, the states losing the most share 2018-2022 included some of the most populous states (CA, FL, NY, PA) and some in the upper Midwest (MI, WI). 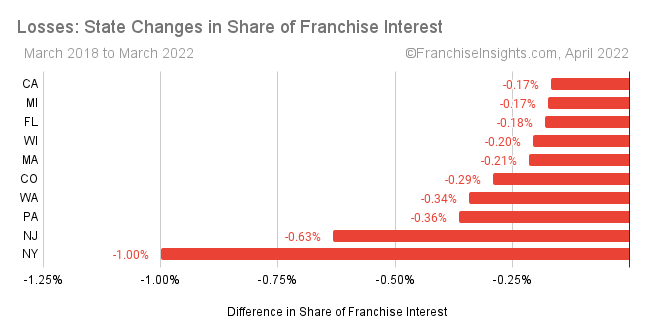 As mentioned in the previous article, the overall trends in location of interest support the theory that having experienced remote work and more flexible working conditions brought about by the pandemic, workers have sought to move to warmer and less-populous states. But in some cases the pandemic seems to have accelerated longer-term trends that already existed.

This proprietary data is drawn from the FranchiseVentures platform of franchise-investment inquiries in the United States.