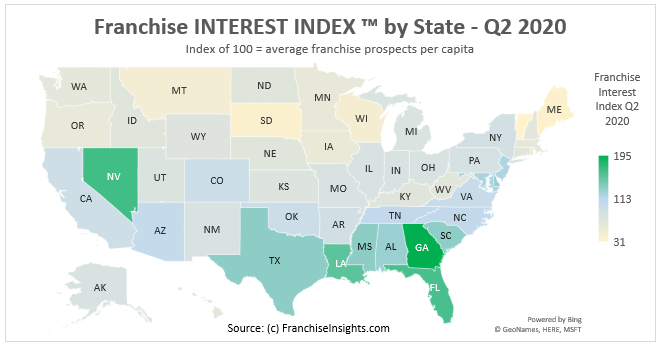 September 3, 2020 – Georgia jumped back ahead of Nevada to lead the nation with the highest adult per capita interest in buying a franchise in Q2 2020, reclaiming the No. 1 rank that it held in the full year of 2019 according to the latest data from The Franchise Interest IndexTM.

The Franchise Insights Franchise Interest IndexTM reveals the relative interest of entrepreneurs making investment inquiries by indexing proprietary data and state-by-state population figures. An index of 100 indicates average interest, while an index of 120 represents 20% higher-than-average interest. Proprietary data is drawn from the FranchiseVentures flow of franchise-investment inquiries in the United States.