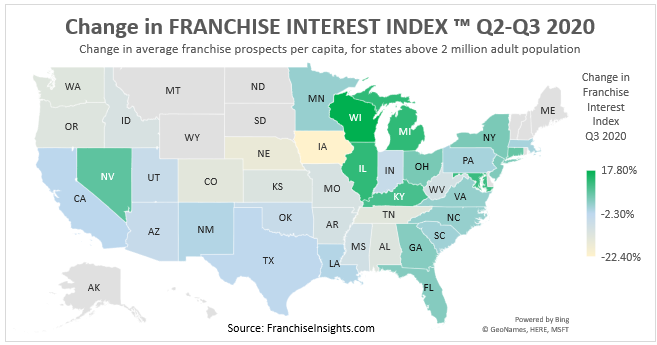 Nov. 4, 2020 – Georgia, Nevada and Florida continued to lead the nation with the highest adult per capita interest in buying a franchise in Q3 2020, according to the latest data from the Franchise Interest Index(TM), and all three saw per-capita franchise interest grow from Q2 to Q3 as the economy regained ground that had been lost during early months of the pandemic.

At the same time, Midwestern states like Wisconsin, Michigan and Illinois posted the largest quarterly gains in franchise interest among large- and mid-sized states.

The Franchise Insights Franchise Interest Index(TM) reveals the relative interest of entrepreneurs making investment inquiries by indexing proprietary data and state-by-state population figures. An index of 100 indicates average interest, while an index of 120 represents 20% higher-than-average interest. This proprietary data is drawn from the FranchiseVentures platform of franchise-investment inquiries in the United States. 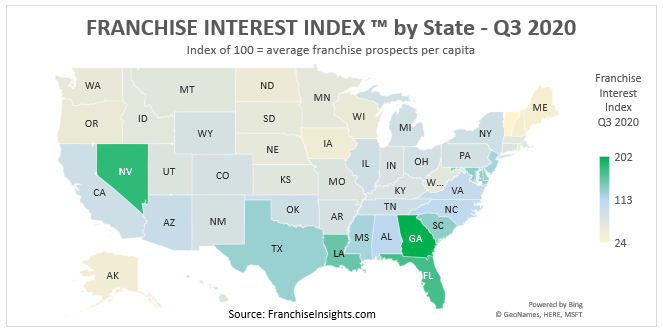 States with Above Average Franchise Interest

Two of the top-five ranked states were large Southern population centers, with more than 10 million adults each.

States with Above Average Growth in Franchise Interest

While Maryland and Nevada enjoyed both above-average franchise interest and above-average growth, the top states for quarterly growth came from those with below-average Franchise Interest scores.