Best Practices Update – Franchise Prospects Most Likely to Respond to Email or Text, but Email Safest for Initial Contact 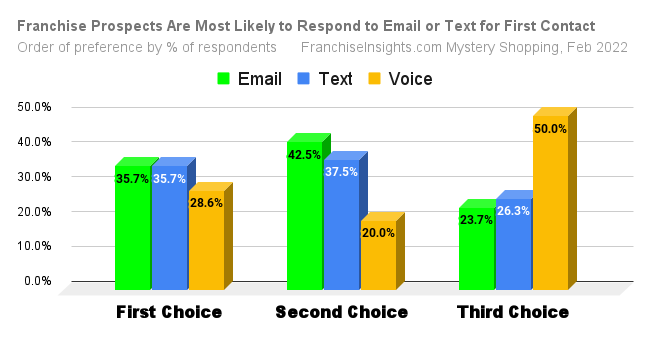 February 16, 2022 — The percentage of prospects inquiring about franchises and businesses for sale who cited email or text as their first choice for initial contact was dead even in February 2022, in a departure from recent months, and largely due to a dip in the preference for email compared to January. In addition, about 43% of respondents said that email was their second choice for initial contact about a franchise they are interested in (higher than the 37.5% who chose text message) according to the monthly “mystery shopping” survey by FranchiseInsights.com.

But in a return to the trend seen in the first half of 2021, prospects indicate voice as the overwhelming third in order of preference for initial contact when respondents were asked to rank voice, email and text. Text messaging had fallen back to third place in recent months as seen in the chart below. 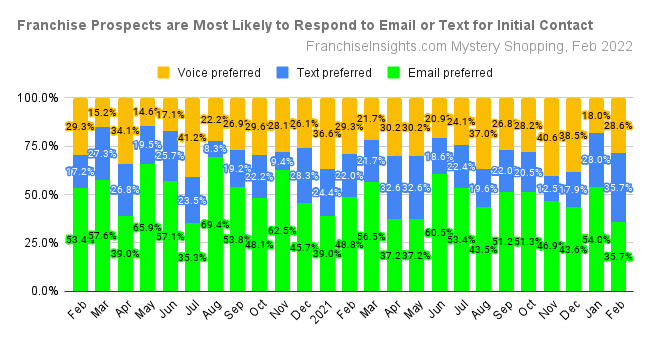 While the survey does not glean “why” behind these trend changes, the lower preference for initial contact by voice emerged during 2020, the first year of the pandemic. Perhaps lower preference for voice calls in January and February are related to the return to work from the holiday season or pandemic office re-openings.

Also in the February 2022 survey, 50% of respondents said they were “unlikely very unlikely to accept a phone call from a franchise” if they had “not previously received a text message or email from that company with more information.”  This is, however, a significant drop from 64% seen as recently as October 2021.

Email remains the most preferred and safest channel for initial contact, at 35.7% for the first choice and 42.5% of the second choice of respondents. The asynchronous nature of email makes it the most effective channel outside of business hours, and also on weekends and holidays. It is also a more rich medium for making your brief “elevator pitch” or conveying information such as video, links or a pdf brochure. Given the dominance of mobile phone use over landlines among business buyers, email is the best place to introduce yourself and begin to tell your story.

Moreover, Apple’s prompt to set up its “silence unknown callers” feature, introduced in the April 2021 iOS release, magnifies the importance of emailing an introduction first, so that the prospect knows to expect a call from you and will add you to contacts. Example wording to include in your initial contact email: “The caller ID will not indicate [insert name of franchise], so we suggest adding our number [your number in format XXX-XXX-XXXX] to your phone contacts”.

For leads that do not respond, following up with a personalized text after noon (9 am on the West Coast) is a good practice.

The Franchise Insights “mystery shopping” survey is conducted monthly among aspiring business buyers inquiring about franchises at the brands of FranchiseVentures.