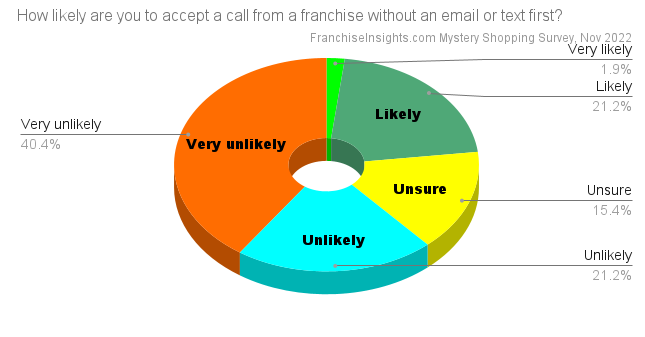 Norfolk, VA, November 22, 2022 – The percentage of franchise prospects who are very likely to return your call before receiving an introductory email has reached an all-time low. In November, only 1.92% of respondents are “very likely,” and another 21.2% say they are “likely” to take a cold call. That means about  23.1% are willing to take your call without an introduction. The traditional “call first” approach will therefore lead to your frustration with almost three quarters of franchise leads, and reduce the chances of more productive conversations with informed prospects.

Recall from earlier studies that the vast majority (71%) of franchise inquiries are made outside of business hours. Prospects most likely want to set up a more convenient time, or acquire some more general knowledge about your franchise before calling you or taking your call.

In our June 2021 survey of franchise prospects, over 61.5% are either unlikely or very unlikely to accept a phone call from a franchise with which they have not first exchanged an email or text. Another 15.4% are “unsure” about whether they would take your call..

As we learned in a recent survey, 70%  of persons inquiring about franchises are visiting the franchise website, and of those, two-thirds of them indicated that they were “very interested and just wanted to learn more” before conversations ensue. 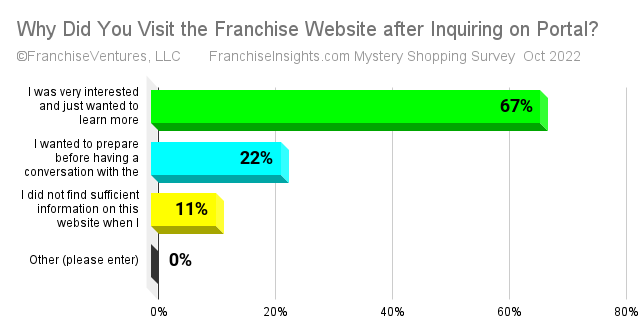 Further, Apple launched a “Silence Unknown Callers” feature in 2019 with the launch of iOS 13, but starting with the April 26, 2021 release of iOS 14.5, more aggressive prompts to set up the feature appeared when viewing the “recent” call list. This development means that many consumers are not going to hear important calls from their banks or requested responses from franchise sales professionals — or even calls from a friend or family member — unless they are already in “Contacts.” Notice that “unknown” and “unwanted” are used interchangeably in the prompt and in “Settings.”

Once the prospect puts you into “Contacts” or places an outbound call to you, your calls will ring through.

Best Practice: Send an email immediately to make initial contact, and suggest they ring you back.

The “mystery shopping” survey of franchise inquirers is conducted monthly on the FranchiseVentures lead generation platform. This survey was conducted November 10-15, 2022.