A Costly Paradox: After Near-Record Contact Attempt Rates in August and September, a Disturbing Trend Emerges in Outreach to Franchise Prospects 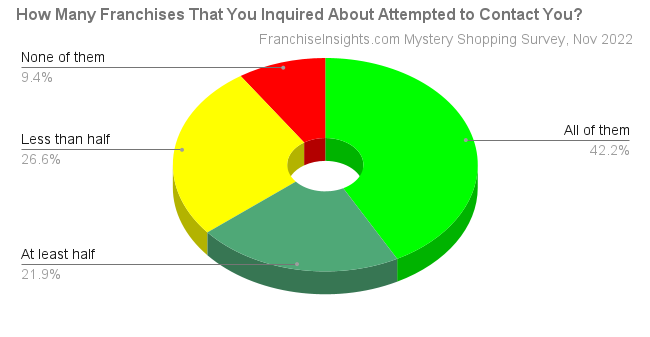 November 16, 2022 – This month a shocking and record low percentage of inquirers about franchises for sale were contacted by all of the franchise systems they requested information from, according to the FranchiseInsights.com monthly “Mystery Shopping” survey. Only 42.2% of inquirers to franchises reported that they were contacted by “all of the franchises they inquired to,” within seven days of the requests, far below  the average rate of 59.8% seen over the prior twelve months, and the third consecutive month of a declining trend. That means that despite opportunities lost to competitive offerings – and the cost to acquire the leads – some franchise development teams walked away from potential sales.

Those who reported being contacted by “none of” the franchises at seven days after inquiry stood at 9.4%, above the all-time low of 2.8% in March 2022. While that was not the worst recorded (27.3% of inquiries went unanswered in June 2020, as the pandemic surged and many businesses were forced to shut down), it does mean that  somewhere between a fifth and a fourth of lead generation budgets were wasted by some franchise sales teams, assuming that the survey respondents are representative of the total population of prospects. With 9.4% of respondents being contacted by none, and 26.6% contacted by less than half, we approximate the lost opportunity to be about 23% of leads unanswered.

Underscoring the importance of increasing contact efforts is the data that almost half of prospective buyers submitted an inquiry to only a single business concept and almost two thirds made inquiries to only one or two concepts as per June 2022 data on the number of inquires per prospect. So franchise sales teams with prompt follow-up can increase their chances of exclusive contact.

Over the last two years, contact attempt rates had dropped as low as 45.5% in June 2020 as pandemic restrictions were enforced, the same month that a record 27.3% of those surveyed reported that none of the franchises that they requested information from followed up within seven days. That downtrend reversed as vaccines  approached in late 2020. Contact attempt rates reached record highs at 75.4% in August 2021 as seen in the chart below. 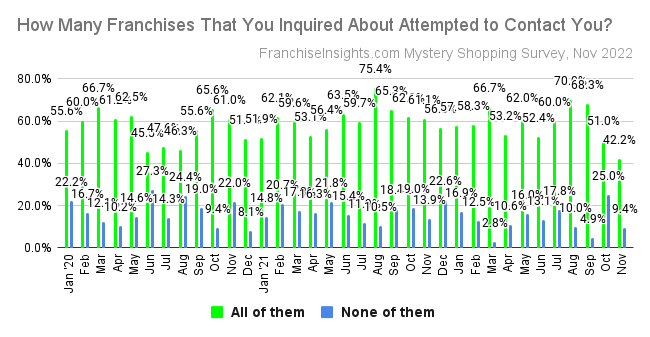 How could this opportunity gap persist? Why aren’t all prospects contacted promptly? Rather than blaming it on insufficient effort or inadequate responsiveness of franchise sales teams, here are a few hypotheses:

A best practice is to include wording in your initial contact email to the effect that: “Caller ID will not indicate that it’s me calling from [name of franchise], so we suggest adding our number [your number in format XXX-XXX-XXXX] to your phone contacts”.

But the number of persons inquiring who are never contacted by any of the franchises they selected for more information is a paradox, given the lifetime value of franchise leads, and the increasing costs and scarcity of franchise leads due to privacy changes at Apple and their impact on Facebook and Instagram.

The Mystery Shopping survey is conducted monthly by FranchiseInsights.com from a sample of franchise prospects that have submitted inquiries on the FranchiseVentures lead generation platform. The latest data is from November 10-15, 2022.